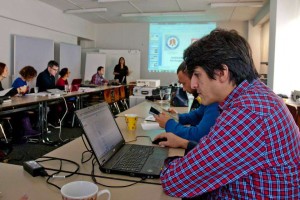 The training course brought together architects, photographers, video editors and historians from Bulgaria, France, Germany, Italy, Croatia, Republic of Turkey and Greece in order to conduct historical, architectural and cultural study of old buildings that have been abandoned, but could be renovated and used as cultural centers.

Provoked by this idea, teams from each country presented their building projects, which are researched and developed an innovative way. Participants had the opportunity to share intercultural knowledge in mixed teams and develop identical project about abandoned building in Dresden. The work of the teams was supported by the German team that contributed to the unification of the participants and the exchange of information and ideas. There was provided time to explore the local culture and architectural features.

Project results were presented in an exhibition in Raskolnikoff gallery in Dresden.