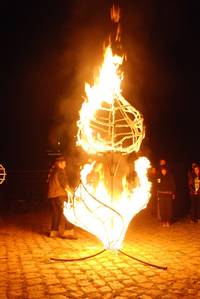 The project took a place for 10 days (between 12 – 23 September 2010) in Dresden as an exchange project of young people, developing their artistic skills, guided by professional juggling and circus artists. The aim of the project is to prepare a presentation for Gala Show as a part of the Burning Bizarre Convention. Every year (since 2007) in September a lot of active jugglers and fire artists as well as people who are interested in these artistic fields get together at the Burning Bizarre Convention in Dresden for one weekend. The jugglers exchange experiences and train their skills. Everybody may join in workshops and courses or simply watch the artists perform on the so called open stage. With these creative activities the Burning Bizarre Convention represents a great getting together where everyone may unfold and learn something about new ways of expressing oneself through art.

Activities and results: 35 youngsters form 7 European countries worked in workshops for clownery, artistry, balance training, fire-juggling and acrobatics. Together they created a part of the Gala Show for the Burning Bizarre Convention in Dresden. All the participants were provoked to work in groups and they were welcomed to bring their own ideas and skills into the main theme: „EUROPEAN YOUTH IN FLAMES“. The visitors of the Gala Show get the chance to learn something about juggling and fire artistry and they were able to give it a try themselves. In addition there were also other workshops the visitors took part in such as pottery, carving into aerated concrete and forging. Kids and adults playfully realized their imaginative ideas. As a result there were made, broadcasted and disaminated (on DVD) a short movie presenting EUROPEAN YOUTH IN FLAMES and Burning Bizarre Convention.

This project was funded by YOUTH IN ACTION Programme.