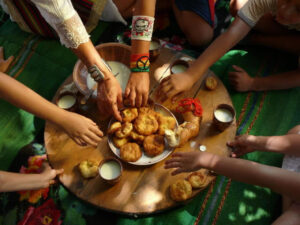 Green Danube Initiative aimed to motivate people to appreciate and protect the natural and cultural heritage on the valley. In the context of this long-term international initiative, all the countries in Danube Basin celebrate Danube Day (29th of June) with different fests and activities.

Under the slogan for Danube Day 2007 – Celebrating Danube traditions was organized celebrations in 41 towns and villages among the Bulgarian part of Danube valley.

In 2007 Danube Days were celebrated in 41 towns and villages along the Bulgarian side of the river. Each of the places presented their authentic folklore dances, music and local cuisine as well as a competition for children’s drawing and a travelling photo-exhibition.

During the festival a short documentary movie ‘ Danube Traditions’ about the wealth of local folklore, crafts, celebrations, popular believes, traditions and customs was shot and released.

Each fest ended with everybody gathering in the village square dancing the Diko Iliev’s Dunavsko Horo (a traditional Danube round chain dance).

The participants in the festivals received booklets with Danube recipes, pocket dictionaries with examples of the local dialect and brochures outlining traditional believes and crafts – fishing nets knitting, boat building, the customs Peperuda (a prayer dance for rain), Lazarkinia and others.

The initiative was organized by Bulgarian Environmental Partnership Foundation (www.bepf-bg.org), supported by Coca-Cola HBC. The team of Centre Alos covered the events, shot the movie and presented the Danube cultural and natural heritage in the travelling photo-exhibition “The Spirit of Danube”.

Long after the 20-days celebration tour was over, I kept looking for the Danube river or for a kid drawing boat …I could’t imagine a day without tasting the baked carp “a la Dako” or the amazing Danube round loaf which we were welcomed everywhere. I could not cross a central city square without searching for the Danube “horo” dance.. People get used to nice things very easily”.