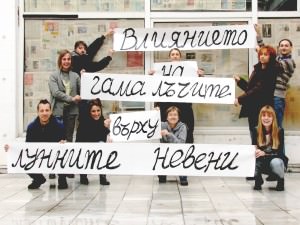 The performance ‘The Effect of Gamma Rays on Man-in-the-Moon Marigolds’ by Paul Zindel will be presented on 24, 25 and 26 April2015 at 7 pm in The Cultural Center ‘Sredec’ at 2A Krakra str. in Sofia (in the inner court).

There is a possibility for subtitles in English. Please ask for it when you book your ticket.

The performance is part of Sofia Theatre  Salon 2015, which is a showcase of nominated performances for Bulgarian Theatre Award – Ikar.  ‘The Effect of Gamma Rays on Man-in-the-Moon Marigolds’ is nominated for best director: Mariy Rosen and for best actress in leading role: Ana Valchanova as Baetrice. The ceremony will be held on 27 March, The World Theatre Day.

More information about  the performance you could see HERE.

The Effect Of Gamma Rays On Man-In-The-Moon Marigolds is a story about a mother, her two daughters, a dying old woman and a rabbit. They all live together in a room of wood which was once a vegetable store. The outside world being enormously close to the one we are living in – being separated only by a wall of newspaper curtain.

Nominations for the Bulgarian Theatre Award Ikar 2015  for directing: Mariy Rosen and for an actress in leading role: Ana Valchanova as Baetrice.